Unity is very much the bedrock of the Biden-Harris administration and their blended families are testimony to that. While the newly installed President Joseph R. Biden Jr. and Vice President Kamala Harris need no introductions, their nearest and dearest may not be quite so familiar to the 158.4 million people who cast a ballot in last year’s presidential election.

Here, WWD provides a cheat sheet to the members of the Biden-Harris clans — who we’re likely to see lots of over the next four — or perhaps more — years.

Ashley, 39, is the sole child of President Joe Biden and First Lady Jill Biden. After receiving her undergraduate degree from Tulane and her master’s in social work from Penn, she went on to become a social worker for the Delaware Department of Services for Children, Youth and Their Families. She is the former executive director of the Delaware Center for Justice, and launched a charitable clothing line, Livelihood, in 2017. In 2012 she married otolaryngologist and plastic surgeon Dr. Howard Krein. A longtime advocate, she has expressed that she will not hold a position in the administration but hopes to use her platform as first daughter to further social causes such as mental health and education.

Easily the most in-the-news of the Biden family after the president and first lady, the controversial Hunter, 50, is a lawyer, investor, former lobbyist — and, now, artist. A graduate of Georgetown and Yale Law School, Hunter was appointed to the board of Amtrak by President George W. Bush in 2006. He cofounded venture capital firm Eudora Global and was on the board of World Food Program USA. Over the years Biden has been at the center of accusations and investigations involving his business in Ukraine and China. He was married to Kathleen Buhle from 1993 to 2017; they share three daughters: Naomi, Finnegan, and Maisy. In 2018, he had a child with Lunden Alexis Roberts, a son whose name is unknown to the public. He has been married to Melissa Cohen since May 2019; they welcomed a son, Beau, in March 2020. He last year took up painting, and reportedly is preparing an exhibition at the Georges Bergès Gallery in Manhattan.

The son and daughter of President-elect Joe Biden, Hunter and Ashley, wave as they arrive to attend the 59th Presidential Inauguration.
Jonathan Ernst/Pool Photo via AP

The three daughters of Hunter Biden and Kathleen Buhle. Naomi, named for President Biden’s late daughter who died at the age of one, is a 26-year-old graduate of Penn undergrad and Columbia Law School who is outspoken on Twitter and was classmates with Tiffany Trump at Penn. Finnegan, born in 2000, is a student at Penn while Maisy, born in 2001, is the same age as Sasha Obama (and the two are reportedly close friends).

The children of the late Beau Biden and his wife Hallie. Natalie, 16, and Robert, 11, are less in the spotlight than their cousins, though Natalie was seen speaking in a video at the 2020 Democratic National Convention. 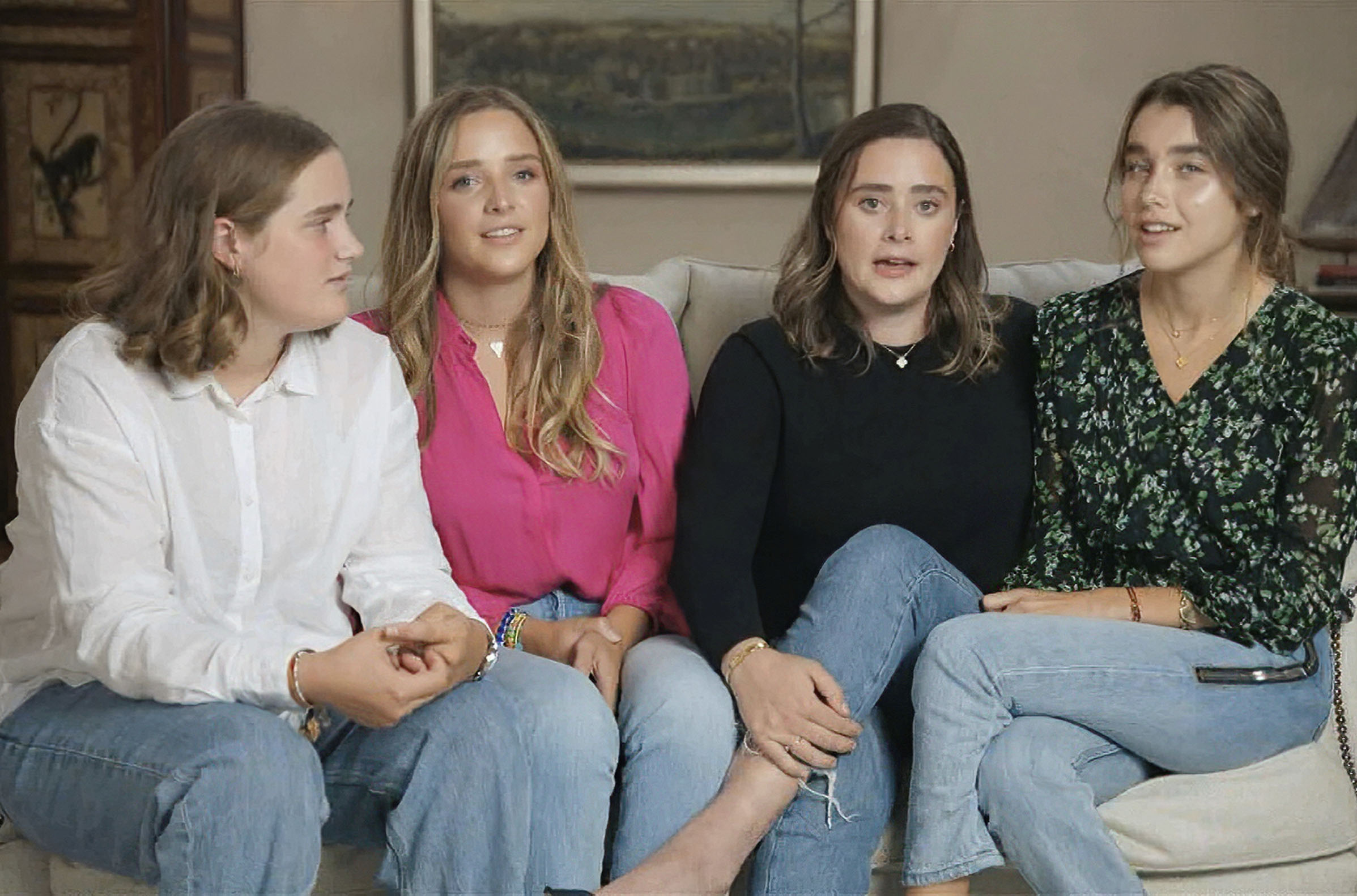 Like his wife, Emhoff is charting new territory as the first Second Gentleman of the U.S. and the first Jewish spouse of a vice president. A self-described “student of history,” he said during a recent trip to the Library of Congress that he wants to set an example in his new role. A former entertainment litigator, Emhoff, 56, will be teaching at Georgetown Law, the largest law school in the country. 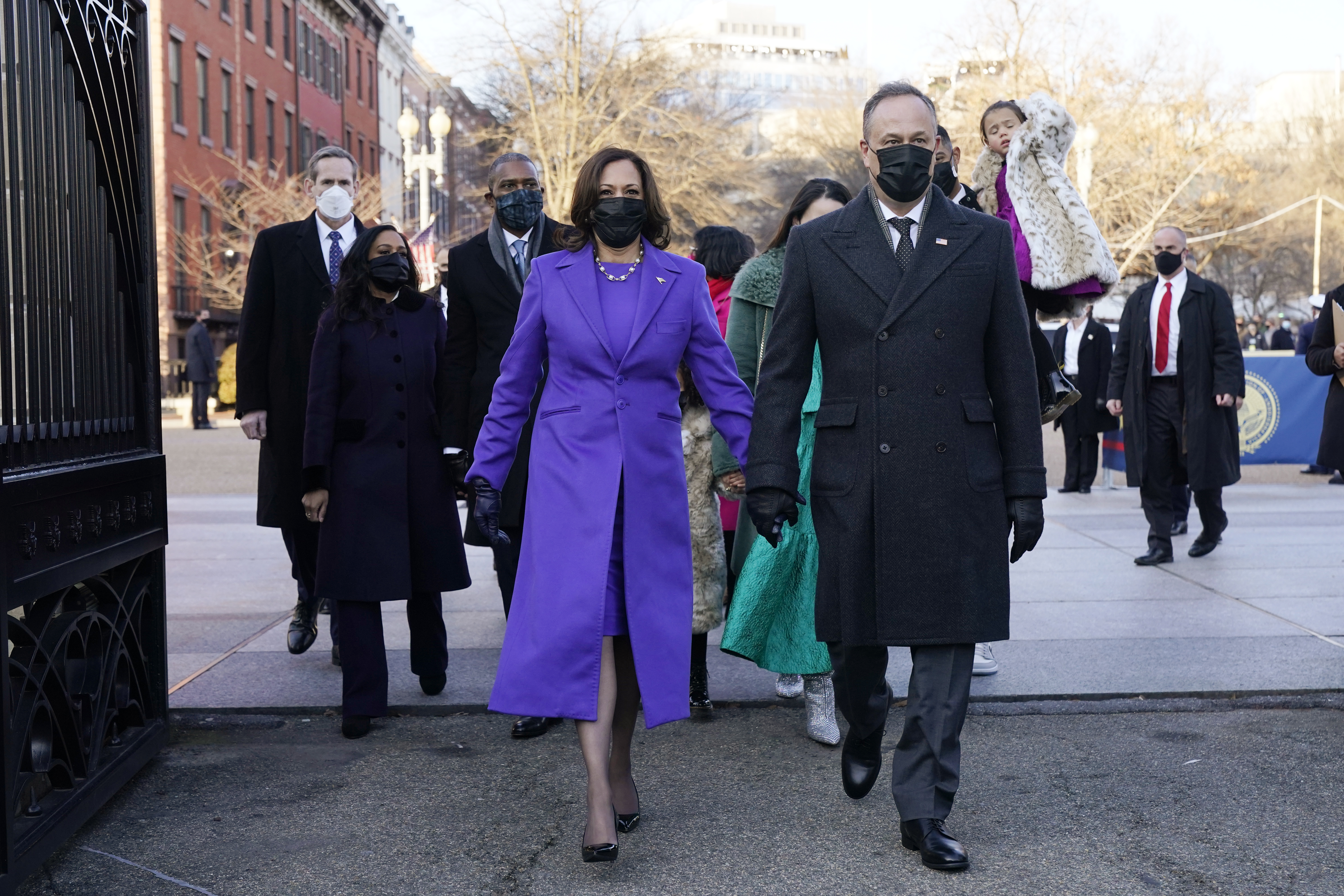 A graduate of Colorado College, Cole Emhoff lives in Los Angeles and works as an executive assistant at Plan B Entertainment, the production company started by Brad Pitt, Brad Grey and Jennifer Aniston. The 26-year-old is the older sibling from his father’s first marriage to Kerstin Mackin. His father married Harris in 2014. A psychology major, Cole Emhoff reportedly described family dinner conversations as almost Socratic. An infrequent Instagram user, he made an exception, posting a 360-degree clip of the inaugural crowd that included his stepmother Kamala Harris, Barack Obama and concluding with his younger sister.

Ella Emhoff, the 21-year-old Parsons School of Design student, was one of the breakout stars from the inauguration. Like poet laureate Amanda Gorman, she has signed a modeling deal with IMG. With 387,000 Instagram followers, Emhoff’s irreverent fashion sense is getting a lot of attention and fans. 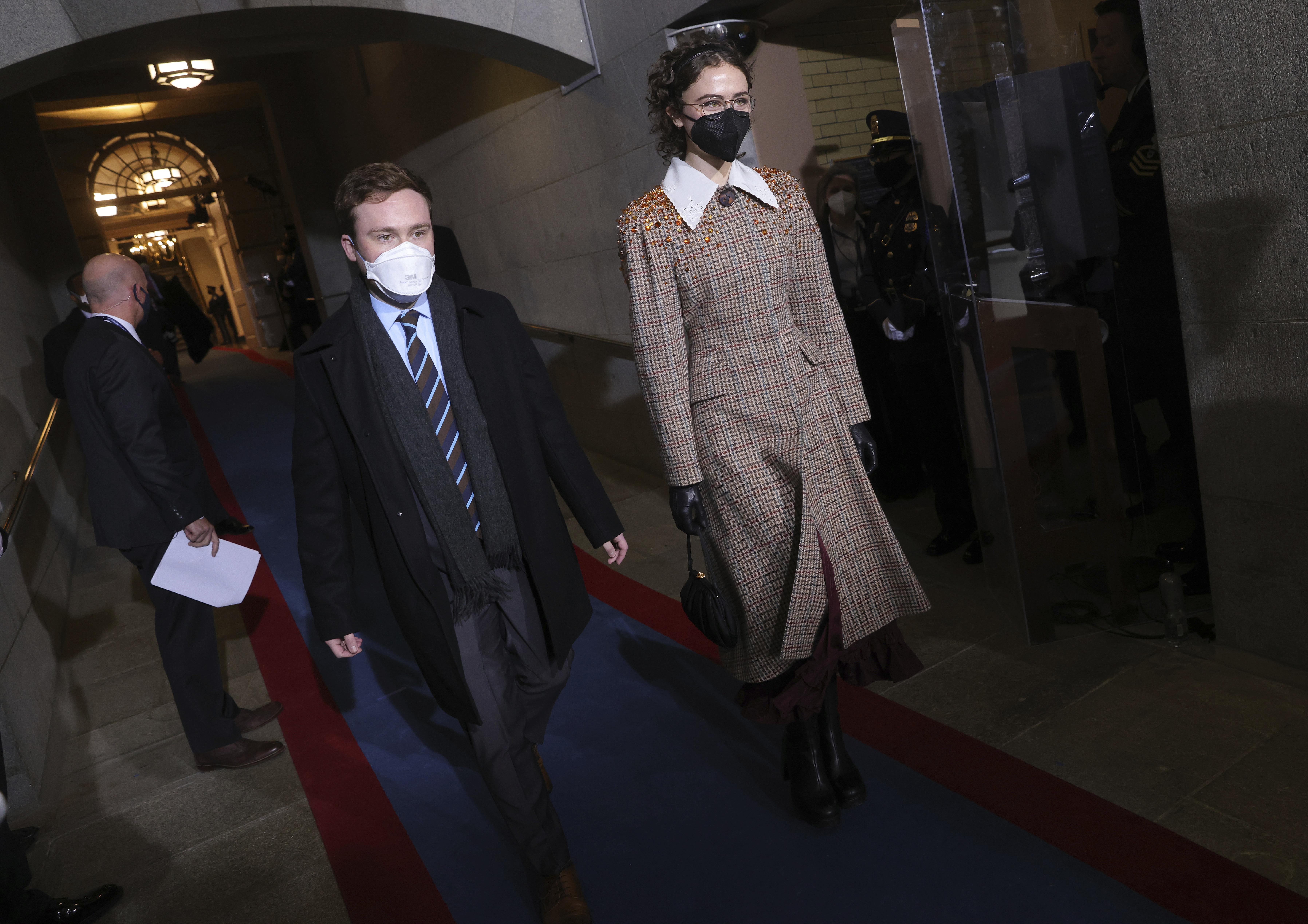 The vice president’s younger sister is no stranger to the political scene. The lawyer, public policy advocate and writer served as a senior adviser for Hillary Clinton’s 2016 presidential campaign and Kamala Harris’ presidential run in 2020. Known as an advocate for equality and justice, Maya Harris has worked as a visiting scholar at Harvard Law School, executive director of the ACLU of Northern California, a senior fellow at the Center for American Progress and as a legal analyst for MSNBC among other posts. Her husband, Tony West, is also a lawyer, who is Uber’s chief legal officer.

Together with her partner Nikolas Ajagu, the couple have two young daughters, Amara and Leela. Ajagu is global head of partnerships for Facebook Advertising Technology, according to his LinkedIn profile. After getting an undergrad degree from Stanford, she earned a law degree from Harvard. In 2017, Harris launched her Phenomenal Woman apparel label, named after a Maya Angelou poem. Her efforts have since expanded to form the Phenomenal Woman Action Campaign. Phenomenal Productions, a full-service production house, was launched in December. Harris’ energized and purpose-driven initiatives caught the attention of designer Prabal Gurung a few years ago. Iloveplum founder Alexia Panza is another fan of Harris’, having dressed her daughters for the inauguration. “She wanted them to be comfy, cozy and warm. She’s just excited and energized and is a cool mom,” Panza said.

Will Scholl’s Wood Clog Turn out to be the New Birkenstock? – WWD