In the stratosphere of fashion illustrators, Kenneth Paul Block orbited the others in a different galaxy.

An artist through and through, Block took his role seriously, chronicling well-heeled socialites and the latest creations of American and European designers. Known for his well turned-out, gentlemanly style, with his Dorian Gray-like youthfulness, Block dressed impeccably, favoring an ascot, fresh-pressed shirt, pinpoint perfect jackets and cigarette holders  for his workdays at the easel. The artist, who died at age 84 in 2009, spent nearly four decades working at Women’s Wear Daily.

His graceful strokes captured the elan of the gloved, gowned and neatly suited women of the late Fifties, then evolved into the more fluid styles of the decades that followed. Drawing glamorous women in beautiful clothes was his childhood quest and one that he achieved. “I was never only interested in the clothes. I was more interested in the women in the clothes,” he once told WWD.

Susan Mulcahy, author of “Drawing Fashion: The Art of Kenneth Paul Block,” first met Block in the Eighties and reconnected with him in the early Aughts. Mention of Block reminds her “how contemporary he still is. That is the genius of his art. Some of the fashion may look dated, but his artwork does not. He was always of the moment and he was very much grounded in the history of art and the history of fashion illustration. He would tell you all of these influences. He also collected fashion art of the past, like Marcel Vertes.”

Influenced as he was by history, Block’s work was always fluid and contemporary, especially as the society-changing Sixties and freewheeling Seventies progressed and fashion too became more fluid. “Amazingly modern always,” Mulcahy said Block, the consummate professional, was “the apex of fashion illustration in his time frame. He was always able to view things with this very specific lens. He didn’t just go into an assignment and say, ‘Eh, I just want to dash this off. I want to go out to lunch or I want to go out to dinner.’”

Nonetheless, Block could fire off sketches lightning fast while seated at a fashion show. So intent about his art, Block initially didn’t want any words in the book that he published with Mulcahy in 2008. Demanding as he was, the fashion illustrator had a good sense of humor. “I think he would like to be remembered for the quality of his art and his eye,” she said.

Block joined WWD in the late Fifties and stayed until the early Nineties, when Fairchild Publications’ former chairman and editorial director John B. Fairchild decided to disband the fashion illustration department as photography came to dominate.

After graduating from Parsons School of Design, Block started his career at McCall’s Sewing Patterns before moving on to WWD. Never intending to be a designer, Block always set out to be an illustrator, according to Betty Morgan, who runs the Kenneth Paul Block Foundation with her husband Steven, who is Block’s nephew. “We know that from the time that he was seven, eight, or nine years old, he would be stuffed away up in the attic of his parents’ house [drawing]. His aunt Elsie Dick was a secretary, editor and administrative person at Harper’s [Bazaar]. Of course, her magazines were all over the place. He would get his hands on them,” Morgan said, “This is a story that we hear from a lot of these guys. From the time they can remember, they were grabbing fashion magazines and using them as guides and examples. And they were trying to draw what they saw in the magazines. Robert Richards and Bil Donovan have exactly that same story.”

The social set, the Ladies Who Lunch and some of Truman Capote’s Swans — such as Babe Paley, Gloria Guinness, the Duchess of Windsor, Loretta Young and Gloria Vanderbilt — were among his many subjects. He admired Jackie Kennedy and often sketched her for WWD. Once while sketching her at an event in New York, Kennedy approached Block and said, “’I know who you are. Thank you,’” Morgan said with a laugh. “She acknowledged his work.”

Over time Block also developed working relationships with designers like Halston, Bill Blass and others. “They had so much respect for him. We know this to be true — they started designing with the notion in mind that, ‘OK, when Kenneth puts this in Women’s Wear Daily, what’s it going to look like?’ So it was not clear after a while, which cart was in front of which horse. Was Kenneth driving what the designs looked like, because the designers were wondering what it was going to look like in Women’s Wear, or was it the other way around?” Morgan said. “He was very, very influential in that way.” 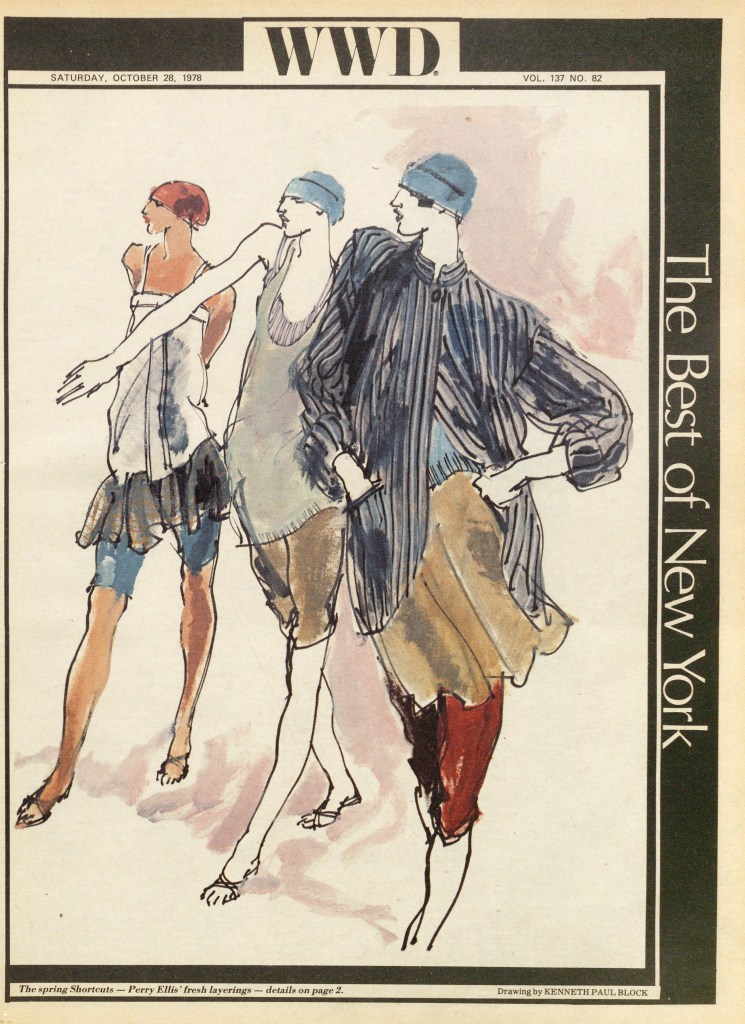 Drawings by Kenneth Paul Block in the Oct. 28, 1978 issue of WWD.
Fairchild Archive

Chris Royer, who worked frequently with Block as a former Halston model, recently recalled how the fastidious artist paid close attention to a model’s hands. “Gesture to me is everything in fashion. It is the way we stand, sit, walk and lie. It is the bone,” Block told WWD years ago.

Mulcahy agreed, describing Block as “the master of gesture in fashion illustration. He captured the way that a woman stood, how she put her hand on her hip, how her head was tilted.”

Raised in Larchmont, N.Y., Block was enmeshed in the arts. A lover of the ballet and the symphony, Block appreciated that quality of life. Diana Vreeland was among his nearest and dearest friends, and she made a point of making his work visible in her projects at The Met’s Costume Institute. One personal link lead to another, according to Morgan.

After Block’s death, John Fairchild said, “He was really Mr. Elegant in the way he drew people. People loved to be sketched by him. Fashion designers would drop everything they were doing, when he walked into the room because they all adored him.”

Not consumed by fashion, Block was more interested in being fashionable, according to Betty Morgan. “It wasn’t as much about the latest style as being stylish. He really was about capturing the elegance of both the women and the clothes, and most importantly the women. It mattered to him. He never used teenage models or really young models. He liked his models to look mature and professional, fully formed and completely competent in who they were. He was really an advocate for women in that way.”

The demise of hats and gloves disappointed Block, due to his everlasting notion of elegance and being stylish. Today’s ultra-casual dress codes wouldn’t pass muster with Block, according to Morgan. “Sometimes I look at folks when I’m walking around, wherever I am, and think, ‘It’s a good thing that Kenneth isn’t here because he would just have a heart attack.’ It is so bad, and he would not understand it,” she said.

Block and his partner Morton Ribyat had a bungalow from the 1930s in Rocky Point, N.Y., overlooking a bluff, and the pair traveled regularly — twice a year to Paris for the collections and to other ports of call. In Manhattan, Block lived in The Normandy apartments on the Upper West Side. For a long time at WWD, Block worked three days a week and used the rest of his work week to freelance for Bergdorf Goodman, Lord & Taylor, Bonwit Teller, Coach and others. Block continued to freelance after exiting WWD. 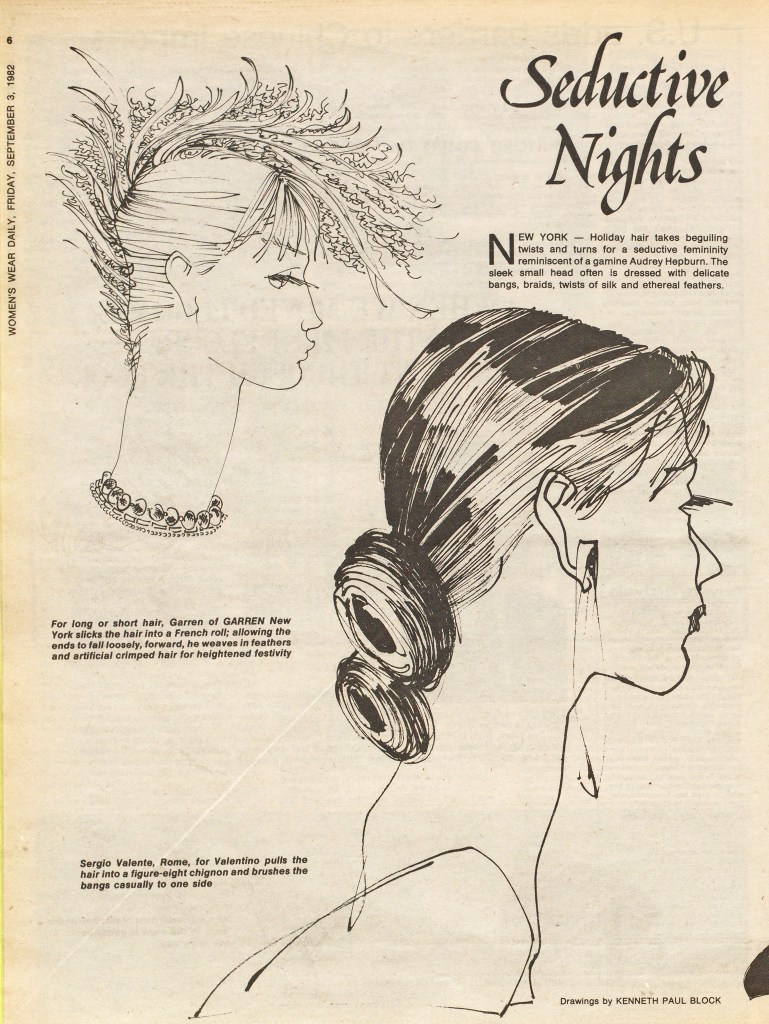 Drawings by Kenneth Paul Block in the Sept. 3, 1982 issue of WWD.
Fairchild Archive

As many former WWD fashion illustrators have noted, Block stood head and shoulders above the others in terms of talent. As for whether Block recognized the degree of his own talent, Block’s nephew said, “It’s not something that I would specifically talk with him about, but I think he was well aware of his place in fashion illustration. Towards the end of his life, he was very concerned that his body of work be kept together as much as possible and not just disappear. That inspired him to give some 1,700 drawings to the Museum of Fine Arts in Boston. They have a sizable collection of his work.”

The Kenneth Paul Block Foundation also has a considerable amount of his work. While many illustrators were so consumed by daily deadlines that much of their work was tossed out, Block saw the value of his work and tried to keep it together as much as he could. “He was very assertive about getting things back. He certainly looked at it as a kind of fine art, more than just a commercial or advertising art that had value to save,” his nephew said.

Above anything, Block was first and foremost about the art. He was well aware that his art was going to be used for advertising and that it was being used to sell products. “But Kenneth was a fine artist. When you spend hours and hours to start to go through his literally breathtaking [art] — some of which is 70 or 80 years old — it can still move you. You can hear the fabric rustle. You can feel the texture of the fur that he drew. It was in his mind the finest art. It was not a commercial production for him. He did not just sit down and crank out 10 of something. His heart and his soul were in those pieces. He never considered it anything less than fine art,” Morgan said. “I know that those words create wars among artists. For purist artists, to say that fashion illustration is art is just heresy. But Kenneth’s work is art. When you get a chance to experience it and be exposed to it, it is absolute genius. And it is fine art, I’m sorry.” 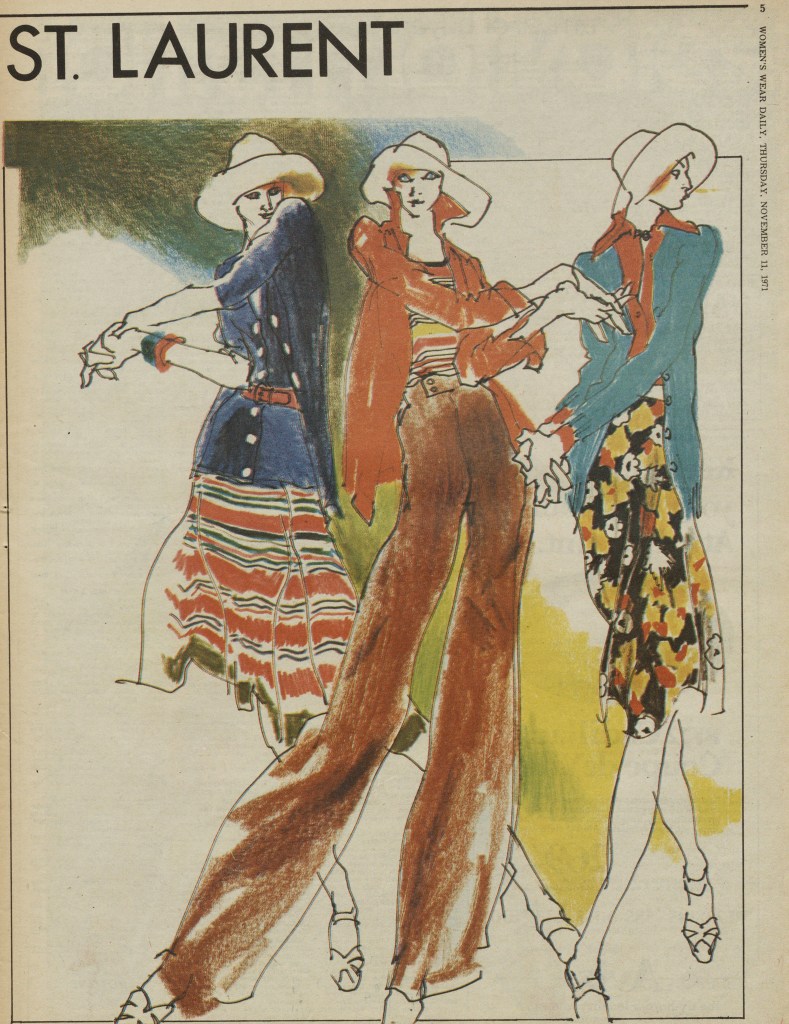 Drawings by Kenneth Paul Block in the Nov. 11, 1971 issue of WWD.
Fairchild Archive

Before deciding on the MFA in Boston, Block’s first choice was the Metropolitan Museum of Art’s Costume Institute (due to Vreeland’s influence), but The Met was interested in actual clothing as opposed to illustrations, Morgan said. In turn, philanthropist Fred Scharf made it possible for the Boston museum to take part of Block’s collection. Referring to a show of Block’s work staged there in 2016, Morgan said, “If there was ever any question about Kenneth’s work being fine art, it transitioned into that genre, thanks to the MFA Boston.”

Mulcahy said, ”Fashion illustration is often dismissed as commercial art, and is not [seen] as fine art. But the MFA really recognized the quality of fashion art.”

The foundation has also lined up traveling exhibitions and it works in close collaboration with Gray M.C.A in London, when possible. Gifts of his work have been made to the Victoria & Albert Museum and the Courtauld Gallery in London. “We’re told by both the Victoria & Albert and The Courtauld that of all the fashion illustration collections they have, Kenneth is the one that has a queue of people waiting to study his work,” Morgan said.

Solid plans for future events are on hold, until the pandemic subsides.

An early advocate of WFH, Block was progressive in his home life, too. After World War II, Ribyat earned an art degree in textile design from Syracuse University. Talented and successful in that sector, he would travel to the South to supervise the printing of the textile designs. Block’s nephew said, “After he and Kenneth had been together for some years, he realized that Kenneth could earn more in an afternoon of drawing than Morton could in a 40- or 50 hour-week of supervising textiles. From there, Morton was pretty much the organizer of their lives. He kept the books, was a great cook, kept the house running, entertained and all of these things.”

As for how Block would like to be remembered, Morgan pointed to “his devotion to elegance and women being at their most elegant. He was a real devotee of trying to capture the brilliant essence of what made a woman elegant. He was just driven by the passion.”